Carbon-Rich Exoplanets May Be Made of Diamonds, Say ASU Researchers

Carbon-rich exoplanets in distant solar systems may be made of diamonds and quartz, according to a new study published in The Planetary Science Journal. 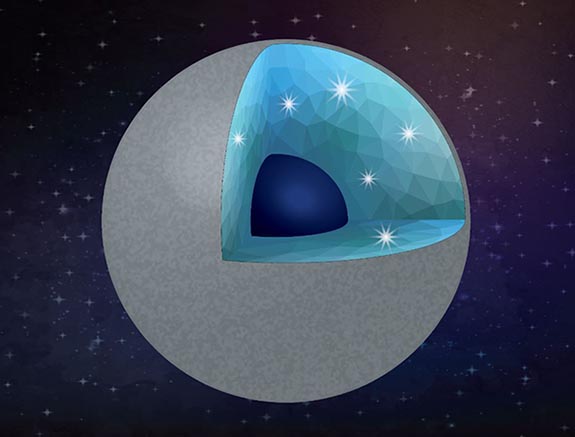 According to a team of researchers from Arizona State University and the University of Chicago, the key factor in determining whether an exoplanet will be rich in diamonds is the chemical composition of the star that it orbits.

They explained that when stars and planets are formed, they do so from the same cloud of gas, so their bulk compositions are similar.

Our sun, for example, has a lower carbon-to-oxygen ratio so its planets, such as Earth, are composed of silicates and oxides with a very small diamond content. In fact, the Earth’s diamond content is about 0.001%, according to the scientists.

On the other hand, exoplanets that orbit stars with a high carbon-to-oxygen ratio are more likely to be carbon-rich. Under the right conditions, such as the presence of water, heat and pressure, the highly concentrated carbon at the core of exoplanets could turn into diamonds.

To test their hypothesis, the researchers needed to simulate in a lab the extreme conditions deep within a carbon-rich exoplanet. They employed high-pressure, diamond-anvil cells to create the pressure and lasers to generate the intense heat.

The researchers submerged the silicon carbide (silicon and carbon) in water, compressed it between the diamond anvils and blasted the material with a laser.

As they predicted, the silicon carbide reacted with water and transformed into diamonds and silica (quartz).

While the prospects of finding a diamond planet are exciting, the scientists claim that the same characteristics that might make a planet diamond-rich would also make it uninhabitable. They believe that carbon-rich planets lack geologic activity and, therefore, have atmospheric conditions that would be inhospitable to life. Atmospheres are critical for life as they provides air to breathe, protection from the harsh environment of space and even pressure to allow for liquid water, say the scientists.

“Regardless of habitability, this is one additional step in helping us understand and characterize our ever-increasing and improving observations of exoplanets,” said the study’s lead author, Harrison Allen-Sutter from ASU’s School of Earth and Space Exploration. “The more we learn, the better we’ll be able to interpret new data from upcoming future missions like the James Webb Space Telescope and the Nancy Grace Roman Space Telescope to understand the worlds beyond our own solar system.”